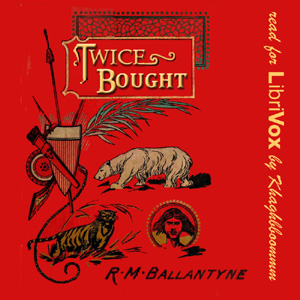 LibriVox recording of Twice Bought by R. M. Ballantyne.
Read in English by Khaghbboommm
This story is set in the gold fields of Oregon, where Tom Brixton, and his best friend, Fred Westly, are digging gold to try to “make their pile”. Before leaving England, the steady and God-fearing Fred had promised Tom's mother that he would do his best to take care of his friend, but in spite of all his efforts, Tom had fallen in with bad companions and taken to gambling. He was convinced that he could make his fortune quicker by attempting to increase it at the dice or card table, and all his friend's attempts to make him see his errors were unavailing. Finally, after being cheated out of all he owned, he stole the money back from the camp bully, Gashford, who had taken it from him, and had to flee for his life from the camp, before “Judge Lynch” could catch up to him. After being captured by the irate miners, and released by another friend, he managed to almost escape, but was caught again, this time near the cabin inhabited by an older prospector and his daughter, whom Tom loved with his whole heart. There was a difficulty though in his way- Betty, (otherwise known as the “Rose of Oregon”) was a devout Christian, and would never give her heart to one who wasn't. She did give him some excellent advice though, at a time when he most needed it.
After being captured the second time, and confined in the mining camp, Tom gives up all hope of escape, and even when his friends buy him off he refuses to escape. Circumstances force him to flee a second time though, and this time his two friends go with him. After various other adventures, and several very close calls with death, matters are eventually worked out, and Tom, Fred, Paddy Flinders (a hilarious Irishman) and Betty live “happily ever after”, and are also a powerful witness to the rough gold-mining population of Oregon, before going back to England. - Summary by Alayna May
For further information, including links to online text, reader information, RSS feeds, CD cover, M4B Audiobook, or other formats (if available), please go to the LibriVox catalog page for this recording.